What about the cat?

In addition to the flat, people have asked us what we are planning on doing with Moody, our cat. We are bringing him with us, of course! Traveling with an Oriental Short Hair, a breed renowned for its strong sense of communication, can be a bit daunting (not to say down-right annoying for every other person in your train compartment!). This is how it went…

Moody missed out on the Christian Lacroix designed hotel and Notre Dame. Instead, he spent the last night at our neighbor’s place, a very kind woman who has more than once taken him in while we were away from Paris. 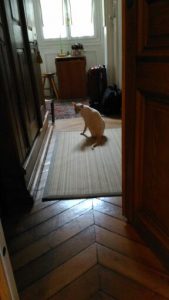 We picked him up early the next day and went to take our train to Avignon.

I asked our vet for some help in quieting Moody down during the train ride. We had given him sleeping pills in the past, but the effect on him seemed to lessen over time, as if his organism had become accustomed to the drug. I didn’t want to give him extra doses for fear of knocking him out – especially once I learned that the pills we were giving him are barbiturates, what Marilyn Monroe overdosed on. Our vet recommended a motion sickness pill and a sleeping pill if that didn’t work. 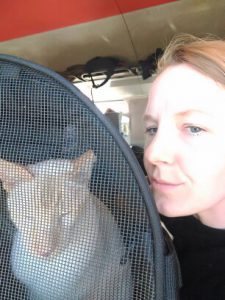 Well, the combination didn’t work. He meowed, and meowed. Less than what we’re used to, but more than what the other travelers were. Eventually, I put him on my lap so he could look out the window and talked softly to him, which appeased him a bit.

We picked up the Dolce in Avignon and traveled down to our friends’ place in Aix-en-Provence were we stayed a few days over Easter. With the sun shinning, Moody was quiet and happy in his carrier propped on my lap. 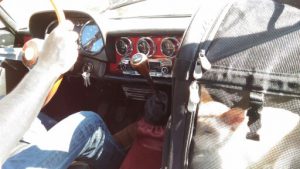 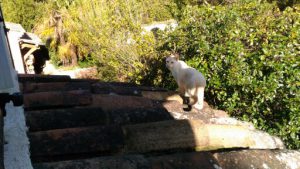 Our friends have a cat, so we separated the two to avoid territorial fights. Moody got to explore the great outdoors from the vantage point of the roof that gave onto our bedroom window.

From Aix we traveled down to the Pyrénées-Orientales by car, avoiding highways as much as possible as driving on those in an old car is not very pleasurable. We decided to let Moody ride outside of his carrier. So stunned was he by the whole experience that he didn’t even notice my putting a harness on him, which I got to avoid him hiding under the pedals. 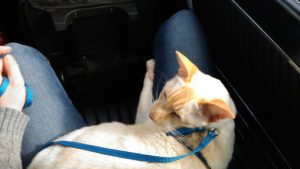 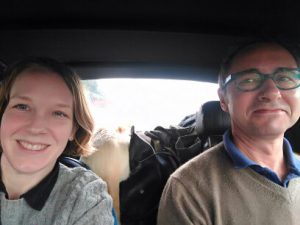 In the end, I think he almost got used to it…. 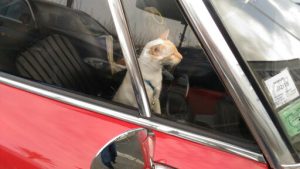 When we arrived in what will be our home-base, we first stayed with family a few days. Pierrick walked Moody in the backyard – the first time he felt grass under his paws! It did seem to fascinate him, all those scents!

Now, we are staying in a small studio flat that has hard, cold, ceramic tiled floors. It’s kind of cold. We don’t think Moody likes it much here, but he does appreciate the afternoon sunshine.