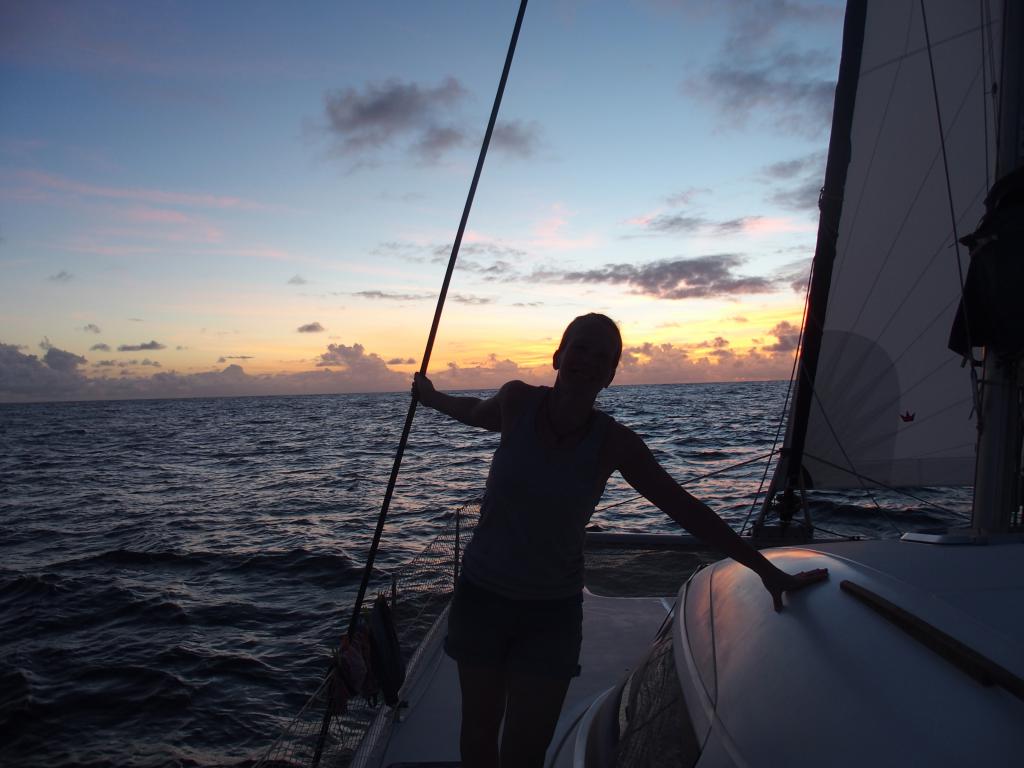 While writing my last post I was waiting for my bread to bake. I had made
2 loaves, white and whole-wheat – a first! I make my loaves short so that
I can bake 2 at a time in the oven. While on a boat, one must be careful
with one’s limited resources, right? It was late and I was tired. I had
put my timer on for 40 minutes and was planning to go straight to bed once
they were ready and lined up on my makeshift rack. I checked on their
progress. The oven had turned off. Our oven often turns off on its own
when it isn’t hot enough, though usually this happens while starting it up
and not while in use. I swear, because all I want to do is go to bed right
away but my bedtime is now delayed. I try lighting it up again. It won’t
light. I try again, and again. I try lighting up the stove top. Nothing.
We are out of gas.
In other words, we can no longer use the stove or oven.
We can no longer cook food.
Fuck.

We hadn’t planned to bring a second canister. The one we started when we
left Mindelo contained 14 kilos of gaz. With that amount, Pierrick and I
can last a month and a half. Two months if we don’t use the oven. With our
crew, the same amount lasted 2 weeks.

Pierrick had a backup plan: we can cook food with the BBQ. We tried that
last night. We cooked 2 huge bowls of pasta so that we could eat some in
salads during the day. Except the BBQ doesn’t bring the water to a bowl,
so pasta cooks to a mush. The stuff is gross. I made some lentil soup for
dinner. It was OK. We added some mushy pasta to our bowls for some carbs.
It wasn’t very good. Still, the young’uns finished their plates and then
filled them up with second servings of mushy pasta. They added cold Tomate
Frito, essentially Spanish ketchup, to their dish and digged in. Clément
sprinkled his with Tandoori spices. Pauline gave the spices a try. She
pouted and said that it wasn’t good but ate it anyways. “Had I known you
all could eat such shit, I wouldn’t have put in the effort to feed you so
well over the past 2 weeks.” It’s true. Case in point Hugo, who’s stomach
is a bottomless pit and from whom one must hide food, has gained weight.
Apparently his mom will be glad of that. And the too-sweet Carefour cereal
bars that nobody deigned to eat so long as there was banana bread have all
gone missing in less than 24 hours. The cookie jar is empty.

There is no more gas and there is no more wind. Our progress is slow.
Pierrick found a way to cypher fuel from the portboard tank to starboard,
so we can now motor our way West. That is a huge relief.

What do you do when you’re stuck in the middle of the Atlantic with no
wind and while advancing at a snail’s pace? Why, you dive in, of course!
We tied a line between the 2 hulls to form a semi-circle of cord behind
the boat. You then go in holding onto the rope and let yourself be pulled
by the boat. If 3 knots is slow for sailing, it feels quite fast when
you’re being pulled behind the boat. We all took a plunge. I went in for a
second dip. While descending the ladder, the tail end of the boat hit a
wave and the ladder, that folds in the middle, folded unto itself with my
legs stuck in it. The pain! A charlie-horse bruise along my right tibia
and on my left calf. Doing Lamaze-type deep breathing, I was able to make
it onto the lower steps of the boat. Meanwhile everybody else was fixated
on a sight behind the boat. Dozens of fish were following our safety cord.
As if fish in the ocean were such a strange thing. After requesting the
ice pack Pierrick finally fetched it for me. I went to lie down in the
trampoline to mend my sore leg. The others fished. They caught 2 small
ones. We’ll eat them carpaccio-style for lunch today.

Most of the day I spent mending my leg and a migraine, which was surely
brought on by a lack of caffeine and the stress over the no-cooking
situation. I can maybe eat kitchari for an entire week, but I cannot eat
mushy pasta with ketchup. That we be reduced to this is not, in my mind,
food-for-survival. It’s the result of stupidly being gluttons. Of not
being careful. This really angers me.

Godspeed us to Barbados.

One thought on “Atlantic Crossing – Day 16”