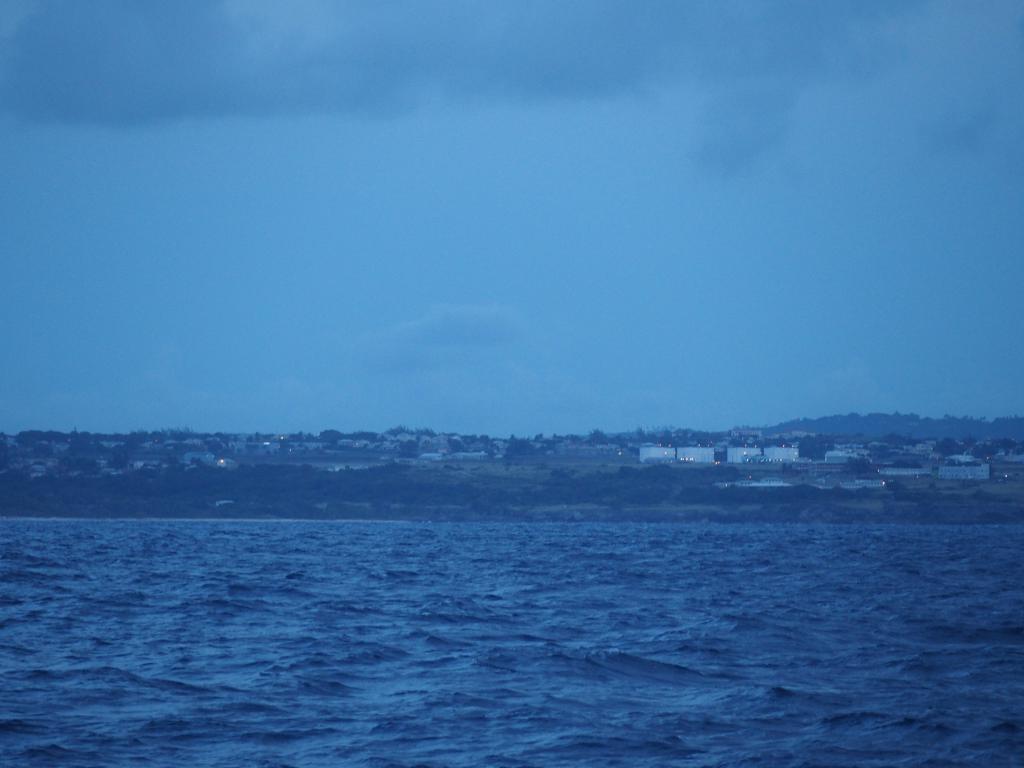 My morning shift started at 5:30 AM local time, and I was happy to be
awake to watch our last Atlantic sunrise and the Barbadian coast as we
lunged its southern side. The island is low and very green. The coast has
been invaded by hotels and holiday promoters, but the buildings are low.
No big hotel complexes. Nothing like the Spanish Coast. Slowly, the crew
and captain woke up too. We made coffee on the BBQ and watched the land.
Pierrick put on Queen’s “We are the Champions”, and I played it a second
time.

How does it feel to arrive to land after crossing the Atlantic? It’s a
low-type of exhilaration. Exciting, but a sort of happiness that bubbles
under the surface without ever exploding on top. It’s smiles, and then
long silent gazes to the coast as we sail by it. It’s a deep sense of
satisfaction. “We’ve made it!” you think, but also, “It’s over.” After
more than 2 weeks at sea, patterns set in, and suddenly the unknown
becomes the land that lies ahead. “Where do we go from here and how long
can we keep up sailing?” I know that our crew, all young adults at turning
points in their life and career, have been pondering similar questions.
“Where now?” “What now?”

I would like to add here a special shout out to all those who have
supported this project. Long sailing voyages are never done in isolation
from the “real world.” Thank you to our brother-in-law Bruno (owner of La
Clinique du Bateau) and friends Fredo (at AZ Voile & all his team) and
Olivier (from Catana) who are Pierrick’s go-to resources whenever a fuck-
up happens, which tends to happen often. Their expertise and good cheer
are a true blessing. Thank you to Pierrick’s sister Carol for being our
home base. Pierrick’s daughters have also been a great help. Camille – who
is my longest loyal reader! – has been at hand to help with routing, has
lent her keen engineering mind to our problems and has offered invaluable
help with logistics. Juliette helps us with all Moody-related issues, and
Blandine is our personal doctor – thank you! And thank you to all our
friends and family, and those of our crew, who have supported this project
even if you thought it was crazy. Your encouragements are more important
than you know.

Yesterday was meant to be spent cleaning, but that didn’t happen. We
arrived at the port authorities at around 10:30. Pierrick went off to do
the formalities while we layed around the boat chatting, too knackered to
clean. An hour later he returned saying that all crew members needed to
pass by the immigration office, so we disembarked and followed him to the
government offices that are in a sort of mall filled with duty-free shops.
Deep Water Harbour, where the formalities are done, is also where the big
cruise ships dock, unloading their full of American tourists. It took
about another hour with the immigration officer, who had to fill out form
after form about which crew member disembarked when and what plane they
were taking. By the end of it we were famished so we walked into town. We
had some trouble finding a place to eat. We stopped at one restaurant,
where I had wifi for a short while and could text message with my brother,
but we left to go somewhere with faster service and more clearly-defined
prices. We walked for a while before finding a second restaurant, where we
ate well but rather small portions at noticeably expensive prices. It
appears that expensive is the word around here.

We decided to anchor for the night in Carlisle Bay. Pierrick and I
reckoned we’d go to the marina in the morning to take advantage of the
water provision to clean the deck. While anchoring, I heard someone shout
my name. Was I hearing things? No, it so happens that we were anchoring
behind Mike and Yulia’s boat, a British/Romanian couple we had met in
Mindelo. An hour later they and the just-arrived crew of Lucky 4 were on
our boat sharing our celebratory champagne and toasts with foie gras. Mike
and Yulia, who have been here for a week, clued us in on the prices to
expect. They haven’t had a great experience of Barbados, stating that they
actually find the people in Mindelo friendlier, which I refuse to believe.
As for the prices, that seems undeniable. The loaf of sliced bread we
bought for yesterday’s apéro cost 4$ US. It’s one thing if the restaurants
are expensive, but if the food is expensive too so that it’s not even
possible to eat cheap on our boat, this will clearly shorten our stay
here.

Today, we clean. The crew wants to take Pierrick and me out for dinner
tonight. Pauline and Hugo leave the boat tomorrow. Clément flies back to
France the day after. Moody is finally back to normal. He was practically
shunning me during the entire crossing and he never dared walk around the
deck. Now he’s back to his affectionate and curious self.

Mike pointed out last night that it’s a very good sign that after nearly 3
weeks at sea we’re happy to spend our first night at land together. I
guess you can say that the crossing is an accomplishment, but having
crossed without wanting to kill each other – and on the contrary still
appreciating our company – makes our crossing a success, for each of us.

One thought on “We’ve made it! We’ve crossed the Atlantic Ocean!”