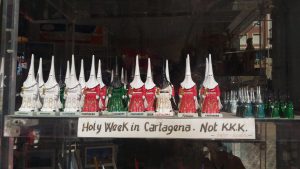 We arrived in Cartagena at 4 AM, 5 hours later than we had planned. You can imagine that our first day there was a very lazy one. We slept, rested and napped, and later in the afternoon we went out for a walk to hunt down the tourist information center. In seaside towns these are usually near the port; Cartagena was no exception. It’s located at a side door of the Consistorial Palace, a grand and beautiful building that dominates the Plaza del Ayuntamiento, from which the Calle Mayor leads up into the old city. And what a city! We are lovers of modernist architecture and Cartagena couldn’t have spoiled us more when it comes to beautiful art déco and art nouveau buildings. I felt like I was walking in a really condensed Brussels. Every day we were there we walked around snapping pictures of this façade or that street. The poverty of the city is made explicit with the state in which so many of these beautiful houses are. Some are completely run down. Some are being renovated. Sometimes the entire building is gutted while the street-front remains standing, the only part of the past that will survive. Some of the bigger houses have acquired a state function, like the Aguirre House that now hosts MURAM, the city’s (small yet very nice) contemporary art museum. Most are for rent or for sell.

We had left Tarragona a week before their annual Chartreuse-laden festival of human towers, a sight that Pierrick would have loved to see. We toyed with the idea of staying an extra week but finally decided against it as we needed to be on our way. So we were especially pleasantly surprised to find out from the tourist office in Cartagena that we had arrived on the first day of their Carthaginians & Romans Festival. For two weeks, groups of people dress up like extras out of Ben-Hur and recreate their past. And what joy it brought to my heart to spy on the street, or at a tapas bar, or taking money out of an ATM a person dressed up like Joachim Phoenix in Troy! It was so very random and so very wonderful. Our first night there was the commencement parade along Calle Mayor. Saturday night we watched scenes of the take over by the Romans of the Carthaginians. Each scene was played out in a different park or plaza and the troupes paraded from one location to the next. The final precession brought us to the city’s stadium, of which half of the grounds were dedicated to a bright and noisy theme park while the other half was occupied by festival’s village. It consisted of row of stalls of the various Roman and Carthaginian groups, that were basically club houses, so basically bars.

I have since learned that quite a few Spanish cities and towns recreate battles of the past, especially that of Christians reconquering the land from the Moors (or Muslims). Cartagena’s festival is different because it lasts two entire weeks and involves a lot of preparation. It reminded me of all the work my friend Camille puts into her “band” for the Nottingham Carnival (London, UK), excepts that’s a 3-day affair. The Carthaginians take two weeks to put on nightly shows and animations to recreate, hence to remember and honour, their past. How many societies willfully commune with their history and traditions in such a way?

Of course, my cynical mind had me wonder if, in 2,000 years from now, the people of Cartagena will recreate the Spanish Civil War of 1936-39. Cartagena is the only Spanish city I (currently) know of that has a Civil War Museum. We visited it on the Saturday, after the Roman theater and before the MURAM. The Roman Theater is located on the Southern slope of a hill, at the top of which there is the Castel del Concepcion. The North-Eastern side of the hill lunges down to Gisbert Street, and it is on this slope that the citizens of Cartagena dug out bunkers to protect themselves from the bombs showered on them by Franco’s troops. Most of Western Spain was Republican, which meant they were generally against the Monarchy, the ruling classes and the Catholic church, and had some sort of left-wing allegiance (if not full out anarchist). A few months after the military coup, General Franco took the reigns of the country, pronounced the Falange, the Spanish equivalent to the Nazis, as the only eligible political party and proceeded to destroy any and all factions that disagreed with right-wing fascist politics, the church and the military. This, in a nutshell, is how the Spanish army came to bombard Spanish cities like Barcelona and Cartagena.

The experience must have been terrifying. Cartagena is a natural sea port, which means it is a sort of hole in the wall on the Western coast in which a bay has seeped in. On all sides it is protected by mountains so, apart from some East-going swell that enters the bay, boats are well sheltered from the winds. This is why Cartagena has been such a prize port-city over the past millenniums. The surrounding mountains also add an air of grandeur to the city, like a majestic archway over a natural portico. They also have an echo effect. The Carthaginian & Roman festivities included several small fireworks shows, the sound of which bounced two to three times off the sides of the cliffs, magnifying the roars of the explosions. To be hiding in a cave surrounded by the sound of bombs and their echoes must still haunt the nights of every person who had to live through it.

Cartagena is on the uprise. The city does not yet have fancy gastro restaurants. Cheap tapas or cheap tourist restaurants are what you’ll find. And yet it has obviously heavily invested in its sights and museums, which were all well housed and well documented. I suspect its beautiful buildings will be bought up and revved up within the next 20 years, and that Cartagena will become another prime culture-tourist destination. Like Barcelona, minus the beach.